If a battery can be isolated as the problem (i.e. recharging a discharged battery to find that the starter is functioning properly), alternator output should be checked. With the vehicle running at normal operating temperature, read the voltage across the battery terminals. 13.7 to 14.7 volts (+/- a few tenths) at idle is considered an acceptable output range. Anything lower than 13.0 volts suggests alternator output is low. Both ambient and engine temperature may affect alternator output, thus there is a reasonable margin of tolerance in the acceptable output range. An alternator producing low or no output must be replaced. All accessories (lights, A/C, stereo) should be turned off when testing alternator output at idle.

If a starter does not respond to a fully charged battery, the starter relay/solenoid, starter motor, or both are the likely culprits. On most modern starter designs there is little reason to test the solenoid in hopes of isolating the problem - starter solenoids are incorporated as a part of the starter assembly, which will need to be replaced.

A seemingly strange, but oddly effective method of isolating a starter motor as the culprit is to tap the shell of the motor with a small hammer (or similar blunt object). If the motor then turns over the engine, the starter is failing. This will not work in every instance, but frequently acts a band aid. The science behind this "old school" solution is that a starter motor will fail when a copper winding shears - tapping the motor with a hammer often realigns the winding and closes the circuit. This is only a temporary fix and the starter should be replaced, but keeping a hammer in your vehicle may also save you from being left stranded. 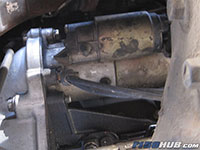 • Disconnect the negative battery cable so that there is no power supplied to the vehicle. 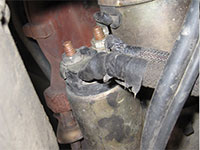 • Remove the red safety cap from the starter solenoid to expose the solenoid terminals (note - the safety cap may have previously fallen off or is otherwise missing, in which case the terminals will already be exposed).

• A 13mm socket is required to remove the (3) bolts that mount the starter to the transmission bellhousing. The bottom mounting bolt is clearly visible from below the starter and is easily removed. 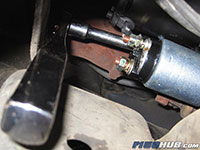 • Moving clockwise from the bottom bolt, the next bolt is difficult to see so you'll need to rely primarily on touch to locate it. It can be accessed using a 13mm deep socket and a 6" extension. There is ample space to reach it up-and-over the starter solenoid. Since you'll be locating the bolt blindly, ensure that the socket is absolutely secure on the head of the bolt before attempting to loosen it - you do not want to strip the head! 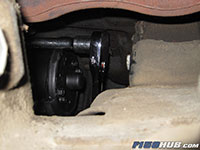 • The top bolt is the most difficult to access - you won't be able to see it and its position lacks the space to reach your hand in to feel for it. Once again, a 13mm deep socket and a 6" extension can be used to reach the mounting bolt by positioning the tool up-and-over the starter motor. Be patient in locating the bolt with the socket and ensure the socket is fully seated on the bolt head before attempting to loosen it. Fortunately, none of the mounting bolts should be particularly tight.

• With the mounting bolts removed, the starter slides out of the bellhousing towards the front of the vehicle. 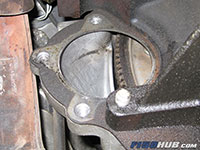 • Once the old starter has been removed, clean the mounting surface and all hardware of any grease, grime, and debris.

• Install the new starter assembly in reverse order - slide the starter in place, tighten down the three mounting bolts, install the wiring to the starter solenoid (small lug to small terminal, large lug to large terminal), and finally reinstall the red safety cap.

• Start the mounting bolts by hand using the socket and extension without a ratchet to prevent cross threading. It is also highly recommended that you thoroughly clean the wire lugs and apply a small amount of dielectric grease to the terminals before reinstalling.