Either the fuel tank or the pickup bed must be removed to access the fuel pump, which enters the fuel tank through the top. There are arguments for and against both methods, but we opted to remove the bed since 1) we had the means to, 2) we wanted to avoid emptying and storing a full tank of gasoline, and 3) we consider working from the top more convenient than working from underneath the truck. There is nothing inherently wrong with either method, although corroded bed bolts may prevent you from selecting this option. If you choose to drop the fuel tank, it may be wise to replace the fuel tank straps, which have historically been the source of controversy due to corrosion.

The pickup bed is secured by (6) T50 Torx bolts (size may vary by model year). If applicable, remove the bed liner followed by the (6) bed bolts. The bolts should have locking tabs that eliminate the need hold the nuts beneath the bed. Next, disconnect the wiring for the tail and license plate light assemblies - trace the wires and you'll find connectors for both. Carefully tuck/position the wiring harnesses such that they won't catch on the frame when the bed is removed. Remove the fuel filler cap and strap that secures the filler neck to the bed. Finally lift the bed and remove, or lift and slide it back so that you can see the fuel pump assembly protruding from the top of the fuel tank. 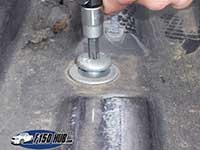 • We opted to remove the bed as opposed to dropping the fuel tank. The bed is held down by six T50 torx bolts - start by removing these bolts.

• Remove the fuel tank cap, filler neck strap, and filler neck mounting hardware so that it is no longer attached to the bed. 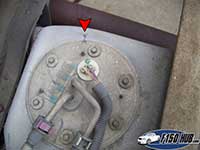 • To lift the bed, we attached tow straps to all four corners and lifted it with a chain hoist hanging from the rafters of the shop, then drove the truck forward.

• With the bed removed and the truck off, disconnect the negative battery cable before proceeding.

• The new fuel pump has an arrow etched into the top cover (red arrow in photo). Mark this arrows location on the tank using a marker so that the new fuel pump is aligned exactly the same as the old one once it is installed. 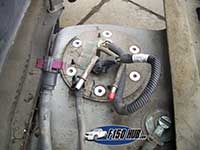 • Remove the (6) hex bolts that secure the fuel pump assembly and disconnect the electrical connector for the fuel pump.

• Remove the two fuel lines from the fuel pump assembly - a flat head screwdriver will help with the retaining clips if they don't want to cooperate. 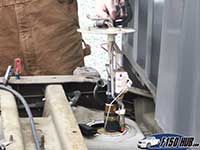 • Carefully extract the old fuel pump assembly from the tank. Remove the old gasket if it did not come out with the pump.

• Install the new gasket and fuel pump assembly opposite removal. A light coating of silicon lubricant can be applied to the new gasket to ensure a positive seal. Make sure the arrows on the fuel pump and tank line up, then reinstall the mounting bolts. 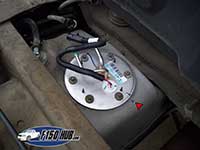 • Connect the fuel lines to the new fuel pump assembly, and then the electrical connector. Reconnect the negative battery cable.

• Reinstall the bed or tank and test the new fuel pump. It's normal for the truck to turn over more than usual during this first start as air is being purged from the fuel line. We recommend cycling the keys to the "run" position several times for 10 seconds at a time prior to cranking the engine over.